A WYNNUM mother-of-three is changing the face of medical technology just by taking her baby to see a doctor.

Her invention, the Throat Scope, is a slim-line illuminated tongue depressor which can be used by medical doctors, veterinarians and the general public.

“I took my baby to the doctors in 2008 and noticed the doctor using a wooden tongue depressor and hand-held torch,” she said. “My baby moved his head and the doctor and I found it very difficult to hold his head in place, that’s when it hit me. Why didn’t they have a one handed device with a light?”

That night, Mrs Holland spent hours sketching designs and creating a name for her idea.

Mrs Holland, who has patented her invention, said she is now on the hunt for a manufacturer and hopes to spend her $50,000 on producing and distributing the Throat Scope.

“I have more ideas and they seem to be coming thick and fast now,” she said. 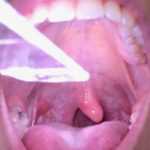