Throat Scope: One Little Idea That Lit Up the World | NAB

Restraining a sick son while a GP pried open his mouth with a tongue depressor sparked the idea for an examination tool that’s now secured global distribution deals worth more than $15 million.

In 2009 young mum Jennifer Holland struck upon a simple idea that would make throat examinations an easier process for health professionals as well as parents. Seven years of persistence and determination later her invention Throat Scope has gone global with distribution deals that will see it sold in more than 140 countries.

As she approaches her start-up business’s first anniversary since launch, entrepreneur Jennifer Holland’s story continues to enthral those who hear it.

The mother of four children under the age of ten is the inventor of Throat Scope, a light up tongue depressor aimed at making throat examinations easier for both doctors and parents.

Newcastle-based Holland and her company have been on an accelerated ride since appearing on Channel Ten’s Shark Tank in May 2015 and then securing international distribution deals worth more than $15 million that will see the product sold in more than 140 countries.

The former accountant’s Shark Tank pitch – with oldest son Ronan alongside her – garnered some desperately needed cash, as well as advice, that’s been the springboard to the global markets she was seeking.

“It was an amazing moment for the business,” says Holland. “My husband and I had invested about $150,000 in it up until then. We’d decided to risk it for the idea, but we didn’t realise the length of the journey, how long it can take to find the right investors. It’s hard.”

Based on Holland’s presentation of her device, which comprises an LED-lit tongue depressor with a disposable blade, ‘shark’ investor Steve Baxter offered to inject $76,000 in return for 30 per cent of the company and a five per cent royalty until the money is repaid.

Just as valuable as the money was the advice Baxter gave her on how to get Throat Scope to market, says Holland.

“I think people forget these are five people with brilliant brains [on the show] and they’re going to find anything you don’t know, that you haven’t thought about. Behind the scenes they do a lot of due diligence on your company,” Holland says.

“Steve straight away said, ‘Jen, you need help: you need to find a team to support you, you need advisors.’ So I went out and found my team.”

The team raised $360,000 on a pre-sale valuation of $2 million and secured distribution deals with major healthcare distributors in Australia, Europe and Canada.

“We then had the money to do our tooling and get the trademarks and patents we needed to go worldwide and get the commercial product that you see today up and running. It happened quickly. I did Shark Tank in February 2015 and launched onto the market in October. The last year and a half has been a blur.”

To help drive the product’s launch the team undertook another $1 million capital raising, reaching the target in July. The company is also in the process of signing off on a deal with a US healthcare distributor. Holland says the marketing push there will accelerate when the product hits shelves next year.

She headed to the US in early September for meetings with potential cross promotional partners and is considering a temporary relocation of her family there next year. “We’re tossing up a few options,” she says.

A budding entrepreneur from her teens, Holland says she’d been on the lookout for ‘the big idea’ for many years. But it was at a trip to the doctor with her then 15-month-old son Ronan at the end of 2009 when the inspiration for Throat Scope struck.

“Ronan seemed to have a sore throat so I took him to the GP,” says Holland. “The doctor got out his wooden tongue depressor and held it in one hand and the torch in the other and asked me to restrain my son while he pried open his mouth. It was pretty unpleasant and I thought there must be a better way.

“When I got out of the surgery I Googled it and found there was really nothing out there. That was an amazing moment. There were products available but they had a fibre optic cable running through the blade and were too expensive compared to the wooden tongue depressor doctors used.”

Holland lodged some patents and began developing the product. In 2011 she won a Queensland Government innovation award and began using the $50,000 prize money to develop and produce prototypes.

Securing the right investors to take the product to the next level proved a major challenge with some personal and business hurdles that saw several attempts fall through but Holland persisted. It was early 2015 when she spotted an ad calling for business innovators for a new TV show. “I put in for it, they phoned me the next day – it turned out to be Shark Tank – and the process began,” she says.

In August Holland also appointed a general manager whose key role will be managing the manufacturing side of the operation freeing her to focus on what she loves best: research and development, and marketing her product.

“I have a range of other products I’d like to bring out under the Throat Scope banner,” says Holland. “And I’ll also be able to do a lot more on the sales and marketing side. I’m very excited about that.”

A Great Tool For SLPs to Use in Articulation and Mirror Therapy! 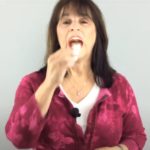