When she appeared on Season One, Jennifer Holland’s illuminated tongue depressor Throat Scope was still in prototype phase. After a tough pitch, Mr Baxter agreed to pay $76,000 for 30 per cent of the company, plus a 5 per cent royalty until the money was paid back.

Today, Ms Holland sells more than 1.7 million blades annually through 22 distribution partners in 155 countries. Throat Scope has also branched out into the digital realm, with a soon-to-be-released app which will enable people to receive a diagnosis over the internet.

“Our first major big-box retailer is CVS in the US, we’re about to roll out in 5000 pharmacies on the 18th of August,” she told news.com.au. “We’ve also partnered with the US Oral Cancer Foundation to run a global campaign called Check Your Mouth, which will educate people about the early signs of oral cancer.”

She has also signed her first distribution deals with universities and hospitals in the US. “They’re using Throat Scope as a training tool, from dental to speech pathology, it’s been a very exciting time,” she said. 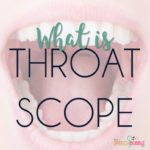