‘Mumpreneur’ Jennifer Holland has made history.

Her company, Holland Healthcare, became the first female-led, Australian organisation to be recognised at the prestigious Edison Awards in New York City.

As the founder and CEO, Jennifer was on hand to collect silver in the Health and Wellness Patient Care category for Throat Scope medical invention.

The oral examination device depresses the tongue to allow a clear view of the entire mouth and throat.

Scooping the award was a surreal moment; one for the Hunter mother-of-four would never forget.

“I always wanted to invent something that would have a positive impact of the world” Jennifer said. “Now I know that will become a reality”.

Jennifer said Holland Healthcare aimed to create a movement that would lead to more people using Throat Scope for the early detection of oral cancer.

“Now we have an Edison Award behind us, I know we can go out there and potentially save lives” she said.

Jennifer said that her children had also played an important role in the company’s success.

“They have been a big part of everything that we do, whether it’s testing of products, videos, marketing, and even support or advice” she said.

The lightbulb moment for Throat Scope came from her sick son’s doctors visit in 2009.

Following that ‘distressing’ experience, Jennifer set about working on what would be the world’s first all-in-one light and tongue depressor.

The device launched onto the market six year later and quickly took off.

Throat Scope is now being distributed to more than 140 countries, with doctors, speech pathologists, schools and veterinarians among those benefiting from the breakthrough product. 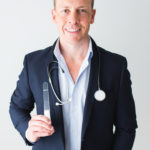