FOR a split second, Jennifer Holland looks like a toddler caught with its hand in the lolly jar.

“I took my children to a Play School concert once and I thought ‘I would love this, being a kids’ entertainer, I love creating and doing arts and crafts with my kids.”

The flash of guilt on the Redhead mum’s face stems from the fact she knows she has way too much on her plate to contemplate shenanigans with Big Ted and Jemima.

Holland’s primary role and greatest joy is that of loving mother, chef, taxi and Mrs Fix It to her four children, aged 8, 6, 5 and 2, her task made tougher when her marine engineer husband Andrew works inter-state.

Her second passion, and growing priority, is Throat Scope, the oral cavity examination medical device she invented seven years ago that has, after a roller-coaster of business and personal events, secured a global distribution deal that will net the business and Holland’s star investor backers at least $15 million over the next couple of years.

“It’s not organic, you have to drive it,” Holland says of her success as she lunches at a cafe near her Redhead office. “I don’t have time to smell the roses, I am always go, go, go. Maybe in five years I might say ‘ok, I’ll have a holiday’.”

Holland’s first brush with the medical world was for all the wrong reasons, yet it – and her parents’ occupations – would lead to her confidence as a medical “mumpreneur”.

She was a baby when her mother, Eileen, a child and family health nurse,  twigged that her daughter didn’t flinch at the sound of clashing as she rummaged in the saucepan drawer.

“Mum took me straight to the doctor’s and they did lots of tests and realised I was deaf,” she says, explaining that the cause was never determined due to the lack of technological nous at the time.

Holland wore listening aids and spent two years with speech pathologists before her hearing inexplicably returned at the age of two, and she soon grew accustomed to frequenting medical rooms thanks to the work of her nurse mum and father, Ralph Watson, a former CEO of Catholic Care of the Aged.

Fast forward to 16 and the “fiercely independent” Holland, the middle child of three children, had left home and was poised to start Year 11 at St Francis Xavier’s College in Newcastle when she convinced her folks to let her complete school at TAFE.

“I just wanted to get it done ASAP,” she says of the move, which shortened her final years of study.

Enrolled at the University of Newcastle, Holland soon flipped law for accounting, later working as an assistant financial accountant for various companies.

In her early 20s – she is now 34 – she had a myriad of start-up ideas she canvassed with her husband and friends.

“Some [ideas] Jen would research then found out they have been done already, others she has had but not followed through with have become multi-million-dollar products,” confirms Andrew Holland.

Her turn would come in 2009, when she took then 15-month old son Ronan to the GP with suspected tonsillitis.

Heavily pregnant, Holland was asked to hold her son on her lap as the GP took the standard wooden tongue depressor, like a Paddle Pop stick, in one hand to examine the inside of Ronan’s mouth, while holding a torch in the other hand.

“It was a big struggle, I was more or less restraining Ronan, and I just looked around the doctor’s office and I realised there were so many new products they use every day so why didn’t they have anything better for this,” Holland recalls.

“I hopped in the car and grabbed my phone and Googled things like ‘illumination of the throat’ and ‘one hand’ and there was nothing there.”

It took a long time for Holland to develop Throat Scope, a transparent, all-in-one light and tongue depressor that removes the stress of an oral cavity examination for kids, GPs and parents – as she added to her brood.

“My main focus was being a full-time mum, my second was developing this product and reaching out to companies to see if they would partner, but because I was in such early stages they weren’t,” she says.

Within two years of working after her kids went to bed she had provisional patents, trademarks and her business name: “It came straight to me …Certain things just fall into place and the ones that don’t aren’t meant to be”.

In 2010, the Holland family was living in Brisbane when she presented her idea to the Queensland Government biomedical board.

“They said it was the best idea they had seen in 12 months and it just gave me the confidence I needed, I thought ‘this could be something big, I’ll keep going’, she says.

She entered Throat Scope in a State Government innovation grants round and won $50,000, ploughing the booty into product development.

I thought ‘this could be something big, I’ll keep going’.– Jennifer Holland

Things looked up when a US medical company showed interest in partnering, but the ramifications of the GFC saw it cuts its innovation budget.

“It was gutting but you get the knockdowns,” Holland says. “The thing is you can’t take it personally, you may get a no today but tomorrow might bring the yes you need.”

When Andrew Holland’s job saw the family relocate to Perth, Jennifer kept beavering away at the lengthy patent authorisation in Australia and the US and developing her website.

Back in Newcastle in 2013, the couple’s fourth child, Isabella, was born as more investors were biting, but when Holland fell ill and delayed in signing the contract, the interest dried up.

“Business moves quite quickly and you have to jump on when things are hot, so I missed that opportunity but my priority has always been my family,” she says.

Fate would intervene, though Holland may wish the circumstances were different.

In May, 2014, she put a dab of peanut butter on a biscuit for Isabella, then eight months, to try for the first time, only to watch in horror as her baby suffered an anaphylactic reaction.

“The biscuit touched her lip and she just exploded, her whole mouth was swollen up to her mouth, I put her in the car and drove her to hospital, which was a mistake,” Holland says, chastising herself for not waiting for an ambulance.

Isabella recovered but during her treatment Holland again watched with dread as three medical staff held her baby down to use a wooden tongue depressor to examine her mouth.

“The staff were just doing their job, but I just thought, ‘I have a product that could change this situation’, it kicked me into action,” she says.

And not a moment too soon.

“I needed an investor because we had run out of money, my husband and I had put $150,000 into it, it was everything we had, patents cost a lot of money and I didn’t want to risk any more,” she says.

Holland had spent hours researching the US version of Shark Tank, working out to the dollar and per centage what she would take if she was offered a deal and how much equity she would relinquish.

But moments before being thrust before a panel of three potential investors, or “sharks”, and rows of TV cameras, she lost momentum, thrown by a request to not say the name of her product during filming, due to  editing requirements.

It was her eldest son Ronan, he who set the whole Throat Scope journey rolling and stood beside her during her first televised pitch, who came to her rescue.

“He just said to me ‘mum, you look after four of us every day, this is easy’,” she smiles, “and I thought ‘right, I’ve got nothing to lose’…I didn’t notice the cameras, the nerves just vanished and I pitched my heart out.”

Tech start-up multimillionaire Steve Baxter offered her $76,000 for a 30 per cent stake in the company, and five per cent of royalties to that sum.

“I decided to invest because Jennifer’s idea solved a problem, was easy to understand and was scale-able,” Baxter says, adding that Holland is “passionate, focused and driven” and has “successfully executed her goals with the support of a good team”.

In its first capital raise last year, Throat Scope netted $360,000 from private investors before securing a distribution deal with Ebos Healthcare, one of the largest medical distributors in Australia and New Zealand.

The best was to come: the company recently signed a distribution deal with Gima Italy, Europe’s largest medical distributor, and Paris Labs in Canada, which will see Throat Scope used in hospitals and surgeries and sold in pharmacies in 140 countries.

Holland won’t be drawn on the value of the deals, only saying the GIMA Italy and Paris Lab partnerships were worth about $15 million over three years.

Another capital raise to fund the company’s push into Europe and the US is underway and she says she wants to retain 51 per cent ownership of the company (at present she holds 60 per cent).

Holland has designed accessories for Throat Scope and is already moving further, developing  prototypes for new products – inspired by her brood’s medical experiences – that she hopes will hit the market sooner than later.

“The [new] products can assist doctors with their diagnosis and are also designed for in-home use, giving parents the ability to examine kids themselves,” she says, choosing her words carefully.

Lunch aside,  Holland speaks quickly of her goals to have Throat Scope in every corner of the world – “we are well on our way!” – and the importance of consistency in building the brand.

She admits her personal life consists of taking her kids to play dates but her eyes light up when she explains how she wants parents to use her product, and kids to “enjoy” a visit to the doctor.

And then, her chair scrapes back and she’s off, scurrying like any harried, working parent to school pick-up, a self-made multi-millionaire in our midst. 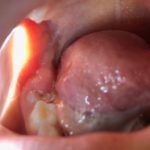